What is a phobia?

It is a persistent, irrational fear of a specific object, activity, or situation that leads to a compelling desire to avoid it. The word phobia comes from the Greek, Phóbos, meaning ‘fear’ or ‘morbid fear’.

Common symptoms associated with phobias include:

A sense of unreality

Most phobias are classified into three categories. According to the Diagnostic and Statistical Manual of Mental Disorders, Fourth Edition (DSM-IV), these phobias are considered to be sub-types of anxiety disorder.

The Three Types of Phobias

Agoraphobia—fear of being trapped in an inescapable place or situation.

Phobias vary in severity. Some people can simply avoid the subject of their fear and suffer relatively mild anxiety over that fear. Others suffer full-fledged panic attacks with all the associated disabling symptoms. Most individuals understand that they are suffering from an irrational fear, but are powerless to override their panic reaction. 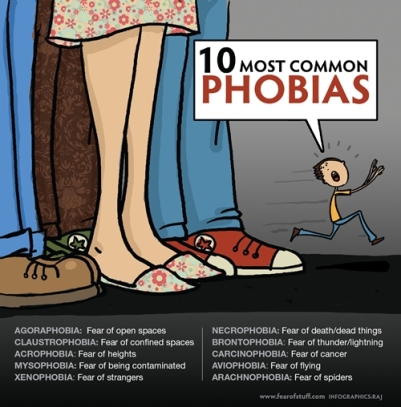 I was born in the West of France, a region I like a lot. We moved around a lot with my parents and ended up in Paris area when I was five. I lived around Paris area until I was twenty one and decided to move to England to improve my English (yes, just like that!) It wasn't easy to be in a country and a part of Britain itself (East Yorkshire)where I could not understand people talking to me. The accent was so important that it took me about a year to become fluent. I stayed there for four years and decided to go back home to Paris. I met my husband, who is American, and finally, only stayed just over a year in France as we moved to the United States. I've always loved literature and foreign languages. I speak fluent French and English, and know some Russian, Italian, Spanish and German. I started to write poems when I was a teenager. My dad actually influenced me a lot, he used to write beautiful poems in French (and I keep telling him he should publish them!)So, I carried on writing poems until I decided to start writing books. I've got two amazing children who keep me on my toes all day long so I only get some time to write at night, but I would not change that for the whole world! And I find inspirations from the music I listen, Lifehouse, Casting Crows, Fireflight and others, but also and mainly from instrumental music, original movie soundtracks (those I love!)
View all posts by N. M. Thomas →
This entry was posted in Writing. Bookmark the permalink.